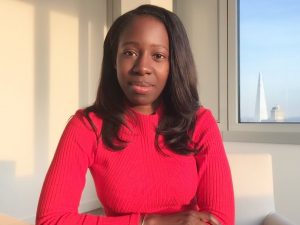 Whitney was diagnosed with Sickle Cell at six weeks old. Since then she has managed her condition using daily medication. She has been fortunate enough to have the support of her parents and her immediate family who have helped her to manage her condition but she admits that she struggled with the transition into adulthood. In the past Whitney found it difficult to talk about Sickle Cell but she is now much more confident talking about her health and wants to encourage other young people to speak up too.

Whitney graduated from the University of Essex in 2012 having studied an undergraduate law degree. She then went on to complete the post-graduate Legal Practice Course in 2014 and is now working as a trainee solicitor in London. Whitney has worked with a number of charities and organisations over the years to try and promote issues of social mobility and raise awareness of living with Sickle Cell. She has also helped to promote and encourage blood donations with a focus on donors from African and Caribbean communities.

When she’s not working or volunteering Whitney can be found trying out one of London’s fun restaurant hotspots, tuned into a Netflix series or spending time with her family and friends.

If you are, or you know, a 10-24 year old living with sickle cell in Hackney and City then email mentors@sicklecellsociety.org or call 07377 170152 to book a session or to find out more.