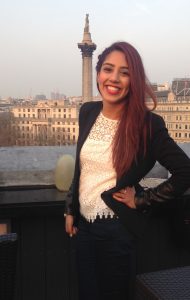 How often do you have sickle cell crises?

It really varies, sometimes it’s once or twice a year and other times every few months. If I catch an infection my Sickle Cell often flares up and I need to get it treated as soon as it happens.

Can you tell us what a crisis feels like for you?

When I have a crisis it is often in back and my chest. It feels like my body is crumbling, and someone is squeezing the air out of me. My back often feels like someone is hammering down on me with a pulsating, hollow feeling.

What happens when you go to hospital?

I go straight into A&E and if the hospital is aware of the condition and often treats Sickle Cell they will treat me straight away without having to wait. They will put a canula in my arm and give me intravenous morphine, paracetomol which will knock me out straight away and take away the pain. They will take blood from me and give me suitable antibiotics. Depending on the crisis if it lasts for more then a few days then I tend to have a PCA which is a machine that releases an amount of opiate into my blood stream to control the pain.

Sickle cell is usually seen as something which only affects Black people. Does this have any impact on you, as an Asian person?

Yes, because there are so very few Asian people, I actually know none, which used to be very isolating as none of my extended family would understand the condition because they had never heard of it. When I tell black people that I have Sickle Cell none of them believe me and they often assume that I must have the trait. When I was younger I felt very lost as I didn’t know which community would understand my illness.

Do you have any tips for preventing a crisis?

Having Sickle Cell you have to know that having the illness means that you are going to have a crisis at some point in your life. Whether you have a few in your lifetime or a few every year, means that each individual will know their body and the limits that they can take.

The best tip is to be able to say ‘No’ when people are asking something of you and you are feeling unwell. Being brave to tell your employer, teacher, family and friends that you’re not feeling upto doing something is so important and is probably one of the hardest things to do because you don’t want to seem weak or unable. Especially if you look physically ok, but know that inside you’re in pain it can be really daunting communicating that across to someone who knows nothing about Sickle Cell.

Sickle Cell is a horrible illness and can be debilitating, however, the best thing is having great strength to keep going after each crisis.