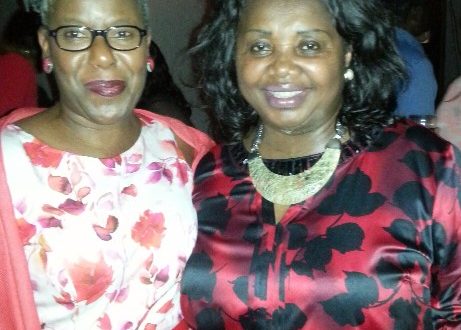 I first met Comfort in October 2004 when I joined the Sickle Cell Society as Regional Care Advisor for South London. At that time she was the Society’s Sickle Link Worker for Hackney and Lambeth. It took a whole week for Comfort to convince me she was not from Nigeria but was from Cameroon, though she admitted spending time in Nigeria. Comfort and I clicked instantly not just because of her character but because I am from Sierra Leone we could also converse in ‘Pidgin’ (a type of patois).

I know several Comforts and three belong to the category where I believe their parent’s stopped short of naming them ‘Comfortable’. Comfort fit firmly into this category: the slightly plump, bubbly, humourous Comforts who are a bit scatty, caring ‘people persons’ who do not take themselves too seriously and are comfortable with who they are.

The Society’s Hackney and Lambeth Sickle Link projects were projects which provided ‘hands on support to individuals and families affected by sickle cell’ and this was very much in line with Comfort’s nature to help and care for people. These projects were the precursors to the Society’s big Regional Care Advisor Project which started in 2004 and as such I worked closely with Comfort especially when she later became the Regional Care Advisor for North London. We would go to many community meetings and Comfort would typically be late and call me just before the meeting to ask for the venue and directions because she was lost!  I often threatened to put my phone off. As Regional Care Advisor Comfort passionately advocated on her clients behalf with social issues, housing, employment, welfare benefits etc. We were their advocates at Disability Living Allowance hearings and I know she sometimes attended hearings even on Saturdays.  For many years Comfort was the Society lead in organising our annual Children’s Holiday where together with volunteer nurses and carers would take up to 30 children with sickle cell on a week’s holiday in the UK.  The reports and pictures would demonstrate the fun they had each year.

Comfort was a fun person and I want to share some of the fun moments we had:

1)      I would often give Comfort a lift home and when walking to my car I would jokingly ask her if she pinned her wig on properly as she told me she once had to run after her wig on a windy day!

2)      I once walked into Comfort’s office and noticed she looked different, I looked  again and we both burst out laughing as she had on false eyelashes which she obviously wasn’t used to as she was blinking every few minutes. She never put them on again!

3)      I sold my old Nissan car which had a new MOT to Comfort for the price of my new road tax. As I never saw her with the car in the UK I would often tease her that I bet my car which she got for next to nothing was earning her lots of money as a taxi in Cameroon.  She would never deny this but would just laugh especially when I would say that she and the man she came with who was called Innocent were definitely not as innocent as they made out!

Comfort cared about people in Africa with sickle cell. We were both part of a UK based NGO called London Focus Group on Sickle Cell in Africa but more importantly she had also set up her own sickle cell charity in Cameroon called Camsico and always spoke of plans to retire home to go and run it. Camsico will now be her legacy and we should do what we can to help.

When I visited Comfort at the hospice in October she recalled what she called the ‘posh’ places that the Sickle Cell Society had made her go to and I reminded her not to forget appearing on the BBC also.  She said to me she had had a good life and was ready to go and rest.  Comfort will not want us to be sad but rather she will want us to celebrate her life and remember the good times.  That is what will give us comfort.